At 65 years, Carl* has spent a third of his life living in residential care due to the way he experiences schizophrenia.

Now, thanks to the Tui Ora Independent Living Pilot he’s living in his own home with intensive support to keep him well – a level of independence he previously never thought possible.

Says Tui Ora Residential Team Leader Victor Verveer: “We supported him to build confidence in himself, encouraged hope and walked alongside him in his recovery journey towards independence.” For too long his mental health had defined him, limiting options and dashing any confidence in his autonomy and that he could make his own decisions.

After two decades of having to live with others – often complete strangers – Carl can now watch TV or do what brings him joy while being supported to do his own washing, budgeting, shopping and cooking.

Carl is feeling engaged in his community and is beginning to reach out towards friends and whānau.  A Tui Ora recovery support worker (RSW) visits three times a day when they are well, up to 24/7 in home care when unwell and has access to a registered nurse who liaises with a multi-disciplinary team (MDT).

Relapses are a normal part of the recovery journey and when Carl lived in supported accommodation he would require occasional hospitalisation, which he found distressing.

This time Carl was offered a choice by his psychiatrist – head to the inpatient ward at Taranaki Base Hospital or stay in his own home with 24/7 support.  Carl chose the latter, with the Tui Ora service stepping up care so around the clock intervention was possible.

Staff have a strong and trusting therapeutic relationship with Carl, which means that during his episode of unwellness they provided reassurance and the care he needed to maintain independence and feel safe.

“Hospital wards are busy places where meals are provided pre-cooked, beds are made for you and linen disappears to be washed ‘somewhere’.  It’s easy to become institutionalised, lose motivation and the transition back into independence,” says Victor.

Watching Carl successfully transition into the community inspired long-term resident, Bernie*. At 50 years old he has spent most of his adult life in care.

He would tell staff: ‘I’m going to die at residential’ and his lack of confidence in himself was striking - head down, slumped posture and lack of engagement with others.

Now in his own home he has begun the process of reaching out to his whānau, keeps his home tidy, liaises with the landlord, goes to the gym and makes day to day decisions he would otherwise have had made for him.

It is the small and seemingly insignificant decisions that Bernie now makes on a daily basis that ensures he’s empowered, responsible and as independent as possible, says Victor.  “His whole identity has changed.” 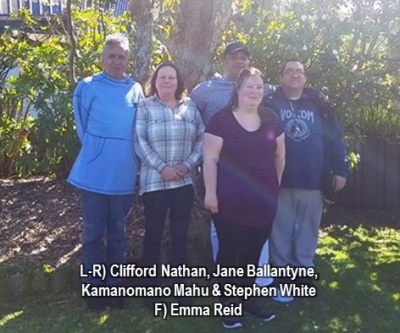 The Tui Ora Independent Living Pilot is a way of delivering services that is familiar to health providers around the country – but in Taranaki it is the first of its kind.  It combines both clinical staff and recovery support workers, brings a cultural focus and is part of a wider well-established kaupapa Māori organisation.

That’s significant because myriad other services can be assessed through Tui Ora – everything from asthma services to vocational support.

The service retains one six-bed residence for those who need a place to transition through, as well as supporting 11 people in the community – so tangata whaiora numbers have increased.

Andrea and Victor have long advocated for this pilot with its focus on the person not the system, and now the results are beginning to speak for themselves.