From the DHB chief executive to frontline GPs, nurses and pharmacists, Tairāwhiti health providers are pursuing a joint goal – to become the first region in New Zealand to eradicate hepatitis C from their community.

Taking point-of-care testing to gang members in Salvation Army halls and mobile fibroscans to isolated communities up the East Coast is helping confront the stigma associated with hepatitis C and removing the shadow of illness which some people have lived with for many years.

“It’s assertive outreach,” says hepatitis C ambassador and mental health and addictions nurse Louisa Karangaroa. “It’s about getting out into the community rather than them coming to us. Ever since taking on this role, it’s breathed new life into my mahi (work).”

The collaboration between the DHB, PHOs, iwi health providers, GPs, pharmacies and laboratory services has been running for only about three months but is already showing great promise and attracting attention from outside Tairāwhiti, including from health minister David Clark, who praised their approach at the hepatitis C summit in Auckland in July.

The aim of the working group, led by Ms Karangaroa, is to break down the stigma which surrounds hep C and creates a barrier to treatment. Their slogan is: “It doesn’t matter how you got it, get treated and get on with your life”.

A lot of the work they have been doing is truly grassroots, such as after-hours presentations to men’s and women’s support groups, pop up clinics, going to emergency housing to speak to prisoner reintegration groups and accessing Pasifika patients through churches.

Use of neutral ground to reach at-risk men 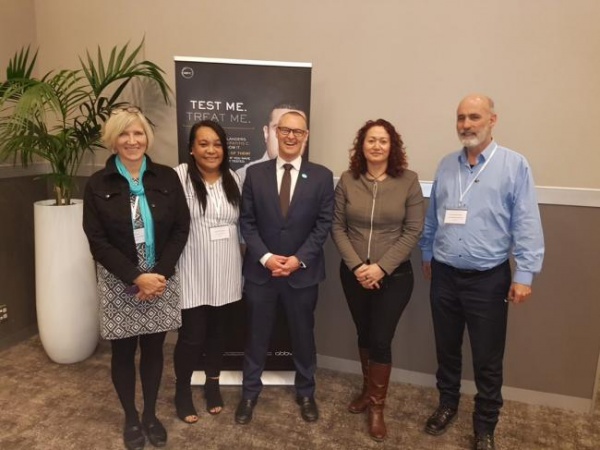 Liaising with the president of a chapter of the Mongrel Mob on the neutral ground of a Salvation Army hall has helped them reach at-risk men who rarely seek treatment.

Testing people in these venues also helps circumvent the stigma of hep C because it is not obvious to anyone else what they are doing there, says Ms Karangaroa.

The partnership with primary care has been essential to the project, according to Jo de Lisle, hepatitis C project lead for HealthShare, the shared service agency which works across the Midland region.

She says earlier this year it was realised that prescribing of hep C drugs like Viekira Pak was lagging in primary care in Tairāwhiti, as it is in the rest of the country. In response, DHB chief executive Jim Green declared the intention to eradicate the disease in Tairāwhiti. The cross-sector working group was set up, with Mr Green sitting alongside colleagues from secondary and primary care.

Ms de Lisle says they do whatever it takes to encourage people to get tested, including offering vouchers so people can buy milk and bread at the service station after a fibroscan at Te Puia Springs Hospital, or entering people into a draw for a hamper. They’re even taking the message to the Poverty Bay A&P show later this year.

Having a well-known Gisborne pharmacy on board has also increased access to free instant finger prick tests without appointments. So far, 145 point-of-care tests have been done in various practices and other locations in Tairāwhiti, with 10 returning positive.

“If we were going to do this right, we were going to have to do something different,” Ms de Lisle says. “These people can be shy and reluctant to step forth. It’s about listening to the community – they have a lot of answers.”

She says the impact, with the increase in testing and treatment and growing awareness about the disease, has been “just incredible”.

“It’s all down to the people. It’s a small group but they have moved mountains.”

Gisborne GP Anna Meuli says prior to the project only one local GP had prescribed Viekira Pak, “...and the patient never picked it up”.

“So, there was definitely a bit of reluctance here. I think that was multifactorial – firstly because GPs are so busy that opportunistic screening for hep C wasn’t really happening. Secondly because there was a lack of familiarity and confidence with prescribing.”

The project’s GP liaison, Dr Meuli says there was no funding for extended appointments to ensure treatment was done well in a group of people who often couldn’t afford an extended consult.

The group has tried to address these issues by promoting screening directly to the community through advertising and providing screening in non-clinical environments which helps catch those who aren’t keen on visiting practices. They’ve also visited practice teams and talked to reception, nursing and GP staff about their roles and possible screening opportunities, providing resources such as posters and a check list for risk factors, and hosting an education evening.

“We discussed with each practice that if not all GPs felt confident prescribing they could perhaps identify one person who wanted to be the hep C champion.”

DHB funding, via Pinnacle Midlands Health Network, has been made available for extended consultations at no cost to the patient and also, crucially, to reflect each positive viral load found by or referred to practices, acknowledging the extra work GPs face in the screening and recall process.

Louisa Karangaroa was in the audience at the hep C summit in Auckland where Dr Clark singled out the Tairāwhiti approach for praise. She says it was humbling. “I’m so glad he gave kudos to Hauora Tairāwhiti.”

She says a measure of success will be if they can find even a quarter of the estimated 700 people in their region infected with hep C and get them tested and treated. And ensure they are not re-infected.

“A lot of people don’t realise. Everyone uses each other’s razors, which is almost like using a shared needle.”

She says, in her eyes, the project is already a success. “Hep C has never been a sexy thing to talk about,” she says. “These people have been living in pain and silence and for them to be treated and know it’s ok to have hep C – that's the best thing for our community, seeing our people being looked after.”